Horse Artist Interview: Uh, that would be me.

Just a quick post here.
My equine art has never taken center stage so it's nice to get a little visibility once in a while. I think they did a pretty good job. I mean, it was basically a standardized question and answer session. But decent questions non the less. Take a look! 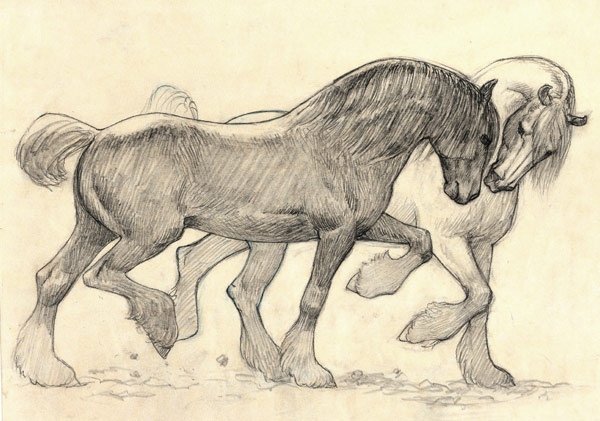 
Well, it's been nearly a year since my last post, (bad blogger, BAD!!), but it's been a very busy year full of distractions. GOOD distractions. The first half I worked on Cartoon Network's first ever CGI movie, Firebreather. Got a nifty credit as lead visual development on the project, too. Those of you unfamiliar with Firebreather (as I was) it's a comic book about a teen-ager who's mom is human and a father who's basically Godzilla (hmmm....conception must have been a challenge). Here's the Wiki description. I worked again with my cousin Barry Jackson who production designed the movie along with most of the crew I worked with on Escape From Planet Earth (which is STILL in production after 3 years but light is at the end of the tunnel). Considering the limited budget, we all kicked major ass including the director/designer Peter Chung of Aeon Flux fame who put in ungodly hours working non-stop to get it in the can. Check out the trailer.  And he made sure the animation studio SAM-G stuck to the original production design (laid out by us) TO THE LETTER. They did a phenomenal job. So, for my first post of 2011 I present you with a few pieces I did on the show. I'll get to the rest of the year on the next few posts so check back soon!