This is the main character from the Stephen King series The Dark Tower. Gunslinger, peacekeeper, Roland Deschain. Roland is a 30th-generation descendant of his world's version of King Arthur, referred to in the series as Arthur Eld. Although he is compared to and described by Stephen King himself as Clint Eastwood in "The Man With No Name", I drew my inspiration from a group of rugged individuals. Yes, Clint Eastwood for facial lines and grit, but you can't beat Paul Newman's eyes for those reach down in your soul and rip out your backbone stares. Plus I really think Viggo Mortensen's portrayal of Aragorn, with his stubbly beard and hair exposed to the elements, gives our hero a more authentic look. This guy wont be concerned with a shorn face. 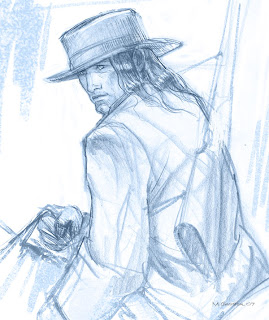